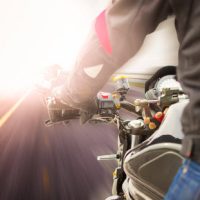 Many people enjoy riding motorcycles in Florida. While it’s a fun activity, it’s also a dangerous one. One wrong move can be fatal for a motorcycle rider.

Sadly, this was recently the case in Kissimmee, when a rider failed to slow down and rear-ended an SUV. The fatal accident occurred on the afternoon of July 13 on Simpson Road.

Both men were taken to a local hospital. The driver suffered minor injuries, but the rider later died. The crash is still under investigation.

In a rear-end accident, there is a legal presumption that the driver of the vehicle that strikes the rear of another vehicle is at fault. The theory behind this is that drivers need to leave adequate room between themselves and other vehicles. When a vehicle is too close to a vehicle in front, they are considered to be tailgating. When a driver is tailgating, they may not be able to react to the vehicle in front making a sudden stop. This can lead to a serious accident.

In some cases, like this one, speed is involved. When a driver is going too fast and does not see the vehicle stopped in front of them, serious crashes can result.

However, there are some situations in which the vehicle in front can be held liable for a crash. Some examples include:

Speed is a common factor in motorcycle accidents. When a rider doesn’t slow down in time, they can cause a serious accident. They can get severely injured or killed.

If you have been injured in a motorcycle crash, seek legal help right away. A Bradenton motorcycle accident lawyer from Cahall Law Firm can help you get the most compensation possible for your injuries. Come get justice. To schedule a free consultation, fill out the online form or call (941) 281-2019.

By Cahall Law Firm | Posted on October 3, 2022
« Motorcyclist Killed After Sideswiping Sedan
What Happens If Hurricane Ian Damages Your Home? »