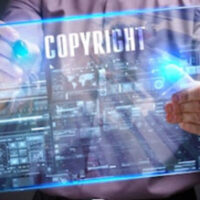 As a songwriter, there’s a lot at stake. Not only is writing a hit song a complicated task as it is, but making matters worse is the fact that there are 97 million other songs out there. If you copy any of them, you could be sued for copyright infringement.

That’s currently the situation that pop star Taylor Swift faces. Her hit song from 2014, “Shake It Off” is at the center of a copyright infringement lawsuit due to similarities with the song “Playas Gon’ Play” from 3LW. While Swift requested to throw out the case, the district judge is allowing the case to move forward, noting similarities in the lyrics, structure, and sequence between the two songs. In particular, the chorus from “Shake It Off” features similar lyrics, with both songs essentially including the same lines “Playas gonna play/And haters gonna hate.”

This was not the first time the song’s lyrics were questioned. The writers of “Playas Gon’ Play”—Sean Hall and Nathan Butler—originally sued Swift in 2017, but the same judge dismissed the case the following year. He claimed the lyrics were too uncreative and unoriginal to warrant copyright protection. However, in 2019, the ruling was reversed and the case returned to the U.S. District Court for the Central District of California.

Copyright Law in the Music Industry

In recent years, the music industry has become a minefield for songwriters. Songs from decades past were never subject to the scrutiny that today’s songs are. Top artists such as Katy Perry and Ed Sheeran are getting sued for copyright infringement. Now add Taylor Swift to that list.

But it’s not just chart-topping superstars. Artists from all genres are excited to put out new music for the masses, but they have the same nagging question: Will I get sued?

In the music industry, there is confusion about what is allowed and what is not. Copyright infringement cases are decided by juries, which include the average listener. They are not musicians or educated musicologists.

Music labels have been very afraid since 2015, when Robin Thicke and Pharrell Williams were accused of copyright infringement. The court determined that his song “Blurred Lines” was too close to the “vibe” from Marvin Gaye’s “Got to Give It Up” from  1977. Thicke and Williams were ordered to pay $5 million to Gaye’s estate.

In the past, copyright laws used to protect just the lyrics and melodies. However, the “Blurred Lines” case suggested that abstract qualities of tempo, rhythm, tempo, and even the general feel of a song are protected under the law.

As a business owner or performing artist, you want to protect what’s yours. The right legal help can provide you with these protections.

For help with copyright infringement or some other business matter, get help from the Bradenton business litigation lawyer at Cahall Law Firm. Call (941) 281-2019 or fill out the online form to schedule a free consultation.